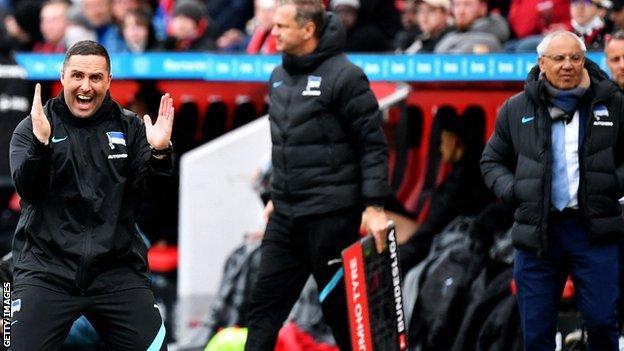 In 2018, Mark Fotheringham was plying his trade in Scotland’s fourth tier at Cowdenbeath as part of a coaching team attempting to save the club’s SPFL status.

Although just a stop-gap as he waited for a return to Germany – his “second home” – the 38-year-old’s most recent job before his surprise appointment as head coach of Huddersfield Town wasn’t any easier, but it was certainly more high profile after assisting Hertha Berlin to Bundesliga survival.

Fotheringham watched Hertha avoid the drop in a nerve-shredding play-off, just as Cowdenbeath did four years prior. The symmetry is evident, but life in the Germany’s top flight was a far cry from nights of part-time coaching.

“I worked with guys that were on £50 a week,” he told BBC Scotland earlier this year. “I could’ve sat at home and waited to go back to Germany, but I chose to go to Cowdenbeath and put my heart and soul into it. Sometimes you’ve got to go right and left and find your way.”

Here, the Scot talks Berlin bike rides, a challenging time in the German capital under the tutelage of “world class” Felix Magath and what an uncertain future holds.

The influence of ‘special’ Magath

Fotheringham’s love affair with German football started as a 19-year-old when Freiburg prized the teenager, who also had spells playing in Switzerland and Cyprus, away from Dundee.

His relationship with former Bayern Munich coach Magath, though, began six years later after an unsuccessful trial with Wolfsburg, a club Magath remarkably led to the Bundesliga title in 2008-09.

With a talented squad already high on numbers, a potential deal fell through, but the pair kept in contact as Fotheringham returned home to finish his playing career – and it wasn’t until Magath was appointed Fulham boss in 2014 that they would work together again.

Despite Magath enduring an ill-fated spell at Craven Cottage, Fotheringham’s work on the training pitch, along with Scott Parker, highlighted his worth to the manager.

“He’s got brilliant presence,” Fotheringham says of Magath, who won the 1980 Euros with West Germany as a player and was twice a World Cup runner-up.

“It’s very difficult to have that. I don’t think that’s something that comes easy. You’re born with it or you’re not – and he’s got it in abundance.

“The guy was an elite footballer. You get top players that really struggle to coach, but he’s a brilliant manager. I don’t think there’s anything he hasn’t won as a player or manager.

“You can’t gift the trophies to someone. It’s something special he’s got. He’s got a winning mentality. It’s a real privilege to work with him.

“What he did with Wolfsburg is unheard of – that won’t happen again in 100 years – but it just didn’t work out at Fulham. It was a very transitional period, but when you’re not winning games, you don’t get the time – that’s football.”

Following relegation play-off survival over his former side Hamburg, Magath confessed it was the toughest task of his stellar 50-year career.

Fotheringham pointed to a frequent turnover of coaching staff as a major issue at the club and another change in management has taken place with Hertha opting to not extend Magath’s interim deal.

And now Fotheringham has found himself in charge of a club in the English’s Championship. The former Livingston and Ross County midfielder has never hidden his ambition be a manager.

“I’m born to be a manager,” he said earlier this year. “I would love to bring this style back home. I think you could be really successful with it if you got backing and had a good group willing to buy into it.

“But financially and professionally, it would be very hard for me to go back to a Scottish club. My target is to keep improving, but if the chance arose at the right club at the right time then I’ll look at all my options.”

How Fotheringham went from Cowdenbeath to Bundesliga

We have our social media pages here and additional related pages here.https://topfut.com/related-pages/