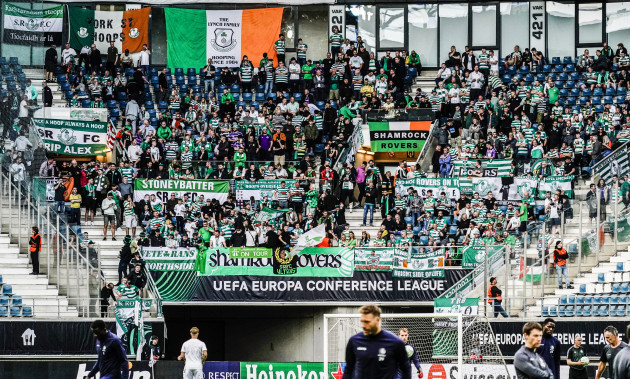 SHAMROCK ROVERS suffered a disappointing 3-0 defeat in the Europa Conference League group stages away to Gent this evening.

Hugo Cuypers gave the hosts an early lead with a superbly taken low finish before Vadis Odjidja-Ofoe capitalised on a Dan Cleary slip, ruthlessly volleying home with aplomb after the defender conceded possession in his own area. The same player added a third for Gent shortly after the hour-mark to end any hope of a Rovers comeback.

It brings the Irish side back down to earth after an encouraging opening to their European campaign and continues a pattern of inept away performances in Europe, in contrast with their excellent home form encompassing four wins and a draw.

Prior to kick-off, Gent were favourites given their home advantage and impressive European pedigree that has seen them reach the knockout stages of each of the Champions League, the Europa League and the Europa Conference League in the past seven seasons.

By contrast, the Hoops are making their first European group stage appearance in 11 years.

It is Stephen Bradley’s side who currently boast the superior domestic record though, as they sit top of the Premier Division table a point ahead of Derry with two games in hand.

The hosts meanwhile would not have been going into this match full of confidence having endured a somewhat rocky start as they sit fifth with eight games played in the Belgian First Division, and the clear low point of their campaign was a 4-0 aggregate loss in the Europa League qualifiers against Neil Lennon’s Omonia.

Both sides entered into this match level on points, having each drawn their first games 0-0 against Djurgårdens and Molde respectively.

Rovers made three changes from their group opener — Jack Byrne, Dan Cleary and Rory Gaffney came into the team in place of Justin Ferizaj, Sean Hoare and Aaron Greene.

The hosts also made alterations following the Molde stalemate. Andreas Hanche-Olsen and Matisse Samoise were replaced by Michael Ngadeu-Ngadjui and promising 17-year-old attacker Malick Fofana, who was making his European debut.

There were plenty of empty seats with the impressive nine-year-old stadium nowhere near filling its 20,000 capacity, though the Rovers section was full up with the travelling fans in fine voice.

Alan Mannus had to be alert early on. The goalkeeper dived to parry away a Cuypers header from Hong Hyun-seok’s corner as the hosts began in the ascendancy.

The same two players were key again, as Gent took a ninth-minute lead. Hyun-seok’s lofted ball into the box was touched back deftly by Fofana and Cuypers made no mistake, controlling the ball expertly before producing a clinical low finish on the edge of the area.

It went from bad to worse for Rovers shortly thereafter.

Dan Cleary slipped when trying to play out from the back, and while he managed to block the initial effort from Cuypers with his body, the ball then fell kindly for Odjidja-Ofoe, whose superb volley from the edge of the area left Mannus with no chance.

The Irish side continued to show plenty of endeavour after going two behind but struggled to seriously threaten a well-organised Gent backline.

With Gent comfortable and Rovers struggling to gain any momentum, the match’s intensity lessened considerably as the first half came to a close.

Jordan Torunarigha tested Mannus with an effort from range that the goalkeeper was forced to parry but otherwise there was little meaningful action as the Hoops were left with a mountain to climb ahead of the second period.

Bradley responded by making one change, as Sean Kavanagh came on for Chris McCann.

Yet Gent continued to control proceedings and seldom looked like conceding. They had one nervy moment, however. A long ball from Kavanagh was headed back by Bruno Godeau into the path of Gaffney, whose powerful volley had to be turned away for a corner by Paul Nardi.

Rovers were growing into the game more though, and Jack Byrne came agonisingly close to scoring, narrowly missing the top corner from Gaffney’s layoff on the edge of the box.

The sense of disappointment was doubled moments later as Gent made it three.

Rare insights on sport’s biggest names from the writers who know them best. Listen to Behind the Lines podcast.


Fofana laid it on for Odjidja-Ofoe, who succeeded where Byrne had just failed by finding the top corner with an exquisite effort.

Rovers had a golden opportunity to reduce the deficit in controversial circumstances moments later.

Nardi was seemingly trying to play the ball out with a Gent player down injured, but Aaron Greene continued on, intercepting the wayward pass and squaring it to Gaffney, whose finish was saved by the goalkeeper, with the incident then leading to a minor fracas between a couple of players.

Rovers went close again through substitute Ferizaj, after Gent again conceded possession in a dangerous area, but the youngster could find no way past Nardi from a difficult angle when through on goal.

It merely would have been a consolation by then, however, as the game had long since ended as a contest.

The Hoops’ next tie is away to Molde at the beginning of October with the Norwegians level on points with Rovers in Group F after they suffered a 3-2 defeat against Djurgårdens tonight.

More away-day blues for Shamrock Rovers amid defeat in Belgium

Our social media pages here and other pages on related topics here.https://topfut.com/related-pages/