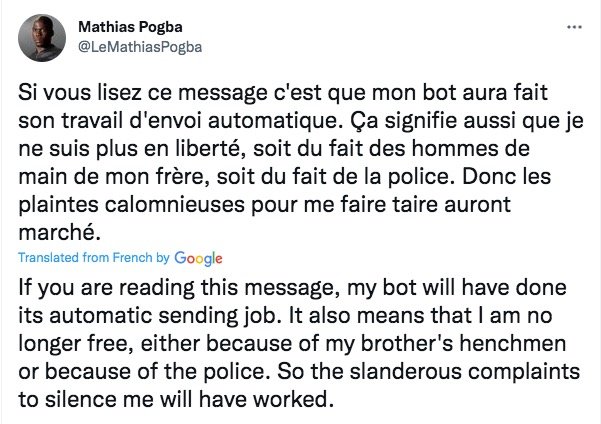 Mathias Pogba has accused his brother, Paul Pogba, of using witchcraft against Kylian Mbappe during Manchester United’s victory over Paris Saint-Germain in 2019.

In a quite astonishing story, Mathias has been charged and detained over an alleged blackmail plot against his brother.

Despite that, a series of videos were posted on his Twitter account on Thursday night containing new ‘revelations’ regarding the Juventus midfielder.

It began: “If you’re reading this message, my bot will have done its automatic sending job,’ Mathias said. “It also means that I am no longer free, either by my brother’s henchmen or by the police. That’s how the slanderers will have worked to silence me.

“Now, here are some of the long-awaited revelations, which I hope will shed some new light and help understand why there is such a relentless effort to silence and discredit me, because what I have to say is not limited to Mbappe. To be famous is not necessarily to be a good person. No one is above justice.”

Paul Pogba’s witchcraft on Mbappe during PSG vs Man Utd

Mathias later goes on to reveal how Paul used ‘witchcraft’ to put a spell on Mbappe ahead of PSG’s clash with Man Utd during their Champions League round of 16 tie in 2019 – a tie in which United won 3-1 to progress to the quarter-finals.

“The turning point came with the World Cup in 2018, where Paul had more faith in the witch doctor than in God, entrusting the witch with a big task in order to help the French team win,” Mathias claimed.

“The witch doctor would go on to tell Mam’s [the intermediary] that the job had already been done, and that was when Mam’s would start to be scared. After that, Paul continued with his witch doctor, notaby in the Champions League to ensure that Manchester United would go through against PSG [in 2019].

“At the request of Paul, the witch was told to neutralise Kylian Mbappé who back then was on a rapid rise, far outstripping Paul’s fame. It was strange to see that during that match Kylian was a shadow of himself against a reserve side.

“The issue is that at the same time Paul was doing everything he could to get closer to Kylian, as we could see in the media, supposedly liking him and calling him his friend – he would often call him, we would see them arm in arm. It went so far that Kylian almost made it a condition for his PSG contract extension that the club would have to sign Paul, without knowing that behind his back Paul was engaging in witchcraft to sabotage his matches.

“That same witch doctor would go on to tell Mam’s, after the match, that he had to stop the ongoing curse, at risk of destroying [Mbappé’s] career, keeping in mind that he was paid by the task- knowing that my brother, always close to his money, had not paid enough for a long-term job, and that the witch wanted to make him pay as much as possible. All of this while according to Mam’s, my brother paid at least €4m for the witch doctor’s services. All of this while his family was in need, and that he swapped his family for success, which witch doctors often ask for.”

After the shocking claims, a video of Mbappe’s performance during that night is going viral.

If truth be told, the French striker didn’t have a night to remember and did indeed look a shadow of himself.

Take a look at his performance below:

Was this the result of Paul’s witchcraft? Mathias seems to think so. But it was probably just a poor performance from the youngster.

Either way, it’s one hell of a story.

You can view our social media profiles here and other related pages herehttps://topfut.com/related-pages/