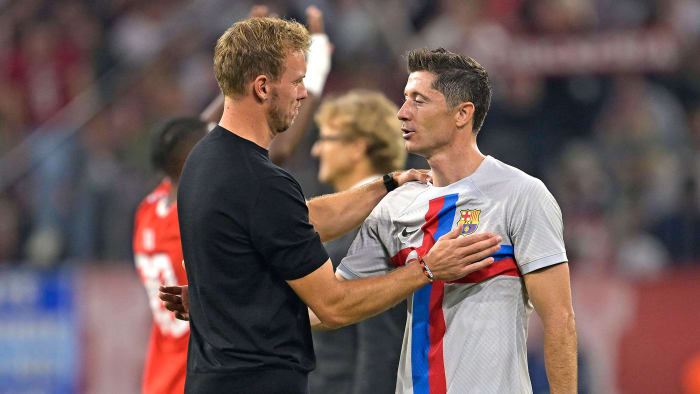 Robert Lewandowski was a key man on his return to Bayern Munich, but not in the way he would have hoped. Lewandowski had the chances—two especially before halftime—but, having survived a shaky first half, it was Bayern Munich that won the clash of the two giants in the UEFA Champions League’s Group C, beating Barcelona 2–0 at the Allianz Arena.

Two wins out of two means Bayern can almost certainly secure its place in the last 16 with a pair of wins over underdog Viktoria Plzeň, while, as always seemed likely, Barcelona’s future in the competition will be decided by its pair of games against Inter Milan. But although this continued a familiar pattern—Barcelona has never won at either the Allianz Arena or the Olympiastadion, while Bayern has now gone unbeaten in 30 group-stage games—it was a world away from Bayern’s pair of 3–0 wins over Barcelona in last season’s competition, when Lewandowski featured for the German powerhouse.

Lewandowski won eight Bundesliga titles and two European Golden Boots in eight years, but his departure from Bayern was acrimonious. While the club blamed Lewandowski’s agent, Pini Zahavi, for unsettling the player, the striker accused the club of a lack of respect. There was a baffling dispute over whether a contract offer had been “concrete” or not before the Poland international left. Not for the first time, the sense was of a level of arrogance form the Bayern hierarchy.

His departure was contentious and so was his arrival at Barcelona, with the club having to pull various “economic levers” to finance its summer spree. But once he got playing, Lewandowski settled immediately. His start has been dramatic: six league goals in four starts, plus a hat trick in the Champions League last week against Viktoria Plzeň—which is to say as many goals as Sadio Mané, Leroy Sané, Kingsley Coman and Serge Gnabry had combined to score this season prior to kickoff on Tuesday, when he was welcomed with applause and some fan signage thanking him for his eight prolific, trophy-filled years with the club.

Dayot Upamecano was preferred to Matthijs de Ligt at the back for Bayern, seemingly because he had played well against Lewandowski before—including, presumably, in training last season. But that plan seemed to be failing as Lewandowski volleyed a glorious chance just over and then had a header saved by Manuel Neuer in a first half that Barcelona dominated.

After an explosive start to the season, scoring 20 goals in its first four games, Bayern has become slightly becalmed of late, drawing three successive league games, although it did win 2–0 away at Inter last week. To an extent, domestic form is irrelevant to Bayern, provided an 11th straight league title is secured. Where it matters is Europe, and that’s where there have been doubts about manager Julian Nagelsmann.

Bayern’s defeat to Villarreal in the quarterfinals last season followed a string of disappointments with RB Leipzig, as well as a thrashing for Hoffenheim at the hands of Liverpool. This is the problem for any Bayern coach: when the Bundesliga is a formality, there are very few opportunities for a young coach like Nagelsmann to learn how to compete with the highest class of opponent other than in the biggest European games.

In that sense, this was a big win for Bayern and Nagelsmann, beating not just a big name but a genuinely good side. But this was not an unambiguous success. Bayern was much better after halftime, playing with far more aggression and imagination, shifting the momentum of the game, and for that Nagelsmann must take credit. But the first half felt a lot like many of Nagelsmann’s European failures: there is a level of openness and abandon that may make sense in the Bundesliga but that risks leaving Bayern very exposed against better opponents.

Although Pedri later clipped a very good chance against the post, Tuesday’s game was settled by two goals in the space of four minutes. First, Lucas Hernandez evaded Marcos Alonso’s attempts to mark him and nod in a 50th-minute Joshua Kimmich corner, before Sané ran on to Jamal Musiala’s lay-off pass to finish neatly. Sané’s petulant reaction to being substituted, though, hinted that there might be substance to the reports of unrest within the Bayern dressing room. If there is pressure on Nagelsmann after the wobble in the league, it will not be diminished by the sudden availability of Thomas Tuchel.

And while the nature of the performance means that Bayern cannot be entirely content with the three points, Xavi and his Barcelona side perhaps will not be too down-heartened by the defeat. This was not 8–2, and certainly there are clear signs of improvement from last season. If Lewandowski, usually such a reliable finisher, had converted either of those first-half chances, there might have been a result to go with it as well.

You can find our social media profiles here and other pages on related topics here.https://topfut.com/related-pages/