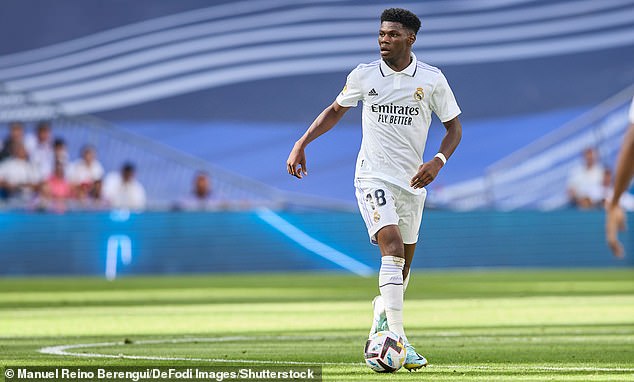 The fourth round of LaLiga fixtures took place over the weekend, with emphatic wins for Barcelona, Villarreal and Valencia among others.

Real Madrid beat Real Betis 2-1 on Saturday, while Osasuna got the better of Rayo Vallecano by the same scoreline the following day.

The table is topped by Real Madrid, with a perfect 12 points from 12 so far, which puts them two points clear of Barcelona and Villarreal in the race for the league trophy at this early stage.

Pete Jenson, Sportsmail’s man in Spain, rounds up some of the biggest talking points from the latest set of LaLiga fixtures.

1. Gattuso, the most popular man in Valencia

‘He could put chorizo in the paella and no one would care,’ tweeted football writer Enrique Ballester on Sunday night as Valencia scored five at home against Getafe. The Italian coach really has made that much of an impression at Mestalla.

‘I think my squad is the best in the world and I’m not just saying that because I have to; I really believe it,’ he had said in the build-up to the game.

Gloriously over the top wishful thinking maybe, but his players went out and played like world beaters after hearing it. 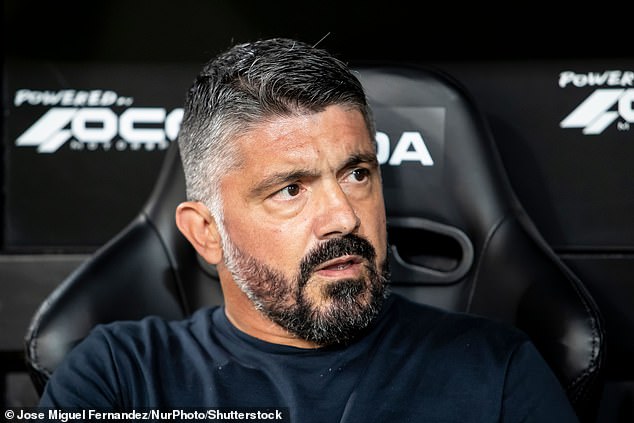 Aurelien Tchouameni had the Bernabeu eating out of his hand in his home debut against Betis on Saturday.

The 22-year-old France international had more touches, played more passes, and even dribbled past opponents more than any of his team-mates in the 2-1 win.

Villarreal are the only team in any of Europe’s top five leagues to not have conceded a single goal so far this season.

They kept their fourth clean sheet on Sunday beating Elche 4-0. ‘It keeps the keepers happy,’ Unai Emery grinned after the latest victory.

Villarreal have to play their home games an hour down the coast at Levante’s ground while their own stadium is renovated, but that didn’t bother them at all in Sunday’s first ‘home’ game of the season. They now sit third behind the big two.

Unai Emery’s Villarreal have not conceded a single goal all season, winning 4-0 against Elche

Real Madrid are now the only team in Spain with a 100 percent record and as they beat Betis, the only other team who had won their first three matches, you could sense a slight changing of the guard.

Karim Benzema remains vitally important but the player really driving the team forward from the front now is Vinicius. His ninth minute opener from David Alaba’s long pass forward was his third of the season.

He has begun the campaign where he left off last season scoring the winner in the Champions League final.

Vinicius is helping to drive a thriving Real Madrid side forward, maintaining their 100% record

5. Barcelona cast-offs well worth having

Such is the strength of Barcelona’s attacking strength in depth this season that there is no shame in being one of the Catalan club’s cast-offs.

There was no room for Martin Braithwaite at the Camp Nou and no space for 20-year-old winger Ez Abde. Both had memorable debuts.

Braithwaite got Espanyol’s 83rd minute winner against Athletic Bilbao who had not previously conceded. And Abde set-off on a stunning mazy run with the ball at his feet to set up the winner for Osasuna.

6. A step too VAR for Atletico Madrid

If you hate VAR and all the so-called football justice it dishes out then you would have enjoyed Real Sociedad’s equaliser against Atletico Madrid on Saturday.

Record signing Umar Sadiq scored within 10 minutes of coming on at half-time at the Reale Arena and the stadium erupted to celebrate the €20m man’s instant impact. Jaime Latre must have seen the ball brush the striker’s arm from his header before it crossed the line but the VAR ref chose not to interrupt the celebrations.

Atletico were left furious, especially as a first half goal from Morata had been ruled out for handball in the build-up.

7. Kounde so much more than a defender

We knew this already from his previous seasons at Sevilla, and on Saturday night they were reminded of it as he produced two assists against them in the 3-0 win.

Kounde is having to play at right-back at the moment and from there he crossed perfectly for Robert Lewandowski to score. He then set up Eric Garcia.

He will end up in the centre and as boss of the defence for years to come – Barcelona’s best signing in years.

Jules Kounde has proved himself to be a critical signing for Barcelona, not just in defence

8. This is no time to be facing Manchester City

One point from a possible 12 have given Sevilla their worst start in 40 years and having been thumped by Barcelona they now have Pep Guardiola’s team coming over the hill to take a charge at them.

It’s difficult to see where the quick solutions lie. Some fans want Julen Lopetegui sacked but the resources he has been handed this summer have come up short or been delivered very late.

Perhaps the last to arrive Danish striker Thomas Dolberg can start his first game and lift the gloom.

It’s not easy to win man of the match when your team has won 3-0 and you haven’t scored but Spain midfield Gavi, just turned 18, did that on Saturday night.

He is still registered as one of the club’s youth teamers and wears number 30 on his back. Xavi’s old number six will surely be his one day.

Barcelona’s lightning transitions are making them even more effective away from home than at home where teams defend deeper against them.

Xavi is yet to coach them to defeat on the road since taking over last November and with 16 away games unbeaten he is closing in on Guardiola’s record of 23.

Explore our social media profiles and other related pageshttps://topfut.com/related-pages/