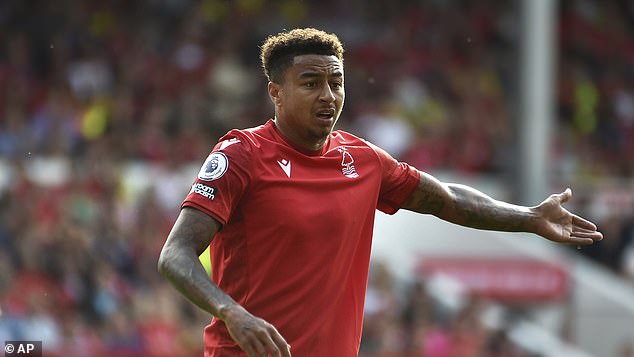 Nottingham Forest owner Evangelos Marinakis looked on like a general as his team threw away a two-goal lead to lose 3-2 against fellow promoted side Bournemouth on Saturday.

The Greek sat in the stands at the City Ground glaring down as his players took on another of the new sides to the Premier League, currently led by caretaker manager Gary O’Neil after Scott Parker’s sacking.

When Forest won promotion via the play-offs in May, following a top-flight absence of 23 years, the shipping magnate and media mogul promised fans he would give their team the ‘ammunition’ to deliver success. 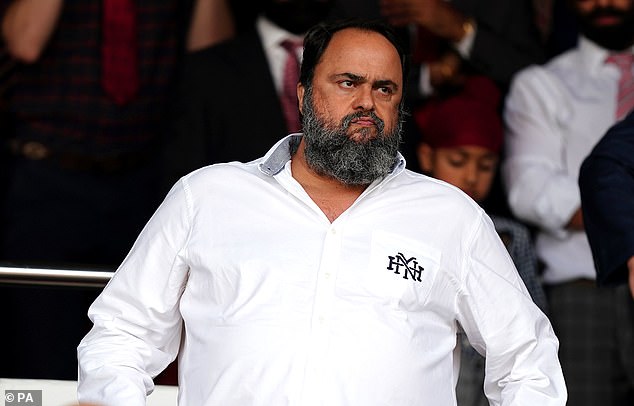 Despite a good performance in a 2-0 defeat against Tottenham last weekend, Marinakis must have been frustrated with his side’s recent showings, with a 6-0 thrashing by Manchester City on Wednesday followed up by the Cherries loss.

The owner has certainly put his money where his mouth is, spending an eye-popping £163.4million on transfers, which is a record for a team newly promoted to the Premier League.

With 21 new arrivals, one wonders if Marinakis – and the fans – even recognise all those now wearing the Garibaldi red of his East Midlands outfit. Of the 16 players involved against Spurs, 10 were recent recruits.

Forest’s spending has outstripped Barcelona this summer, despite the Spanish side spending over £40m on Robert Lewandowski and Jules Kounde, respectively, and £52m on Raphinha

Remarkably, Forest spent more on transfers than all of the clubs in the Eredivisie combined

Fans across the country, if not Europe, have been stunned by Forest’s transfer business. The most startling acquisition was Morgan Gibbs-White, bought from Wolves for an initial fee of £25m, but a sum that could rise to £42.5m with achievable add-ons and further bonuses.

The spending spree continued deep into deadline day. Willy Boly was a late arrival, eventually signing a two-year deal at the City Ground for a reported fee of £2.25m following a five-year spell at Molineux, having joined Wolves permanently in 2018.

Josh Bowler became Nottingham Forest’s 20th arrival of the summer after the club agreed a deal with Blackpool to sign the winger for around £2m. The 23-year-old will be sent to Forest’s sister club Olympiacos on loan.

And at the eleventh hour, a loan deal was agreed for number 21,  Loic Bade from Rennes. Southampton were also battling to land the 22-year-old defender but were brushed away by Forest’s pursuit of the Frenchman, who chose to make a late switch to Steve Cooper’s side.

Forest’s total could yet increase further with reports that they have agreed a deal to sign free agent right back Serge Aurier, formerly of Tottenham.

To put the summer business into perspective, Forest are back among the elite of European football, as far as their spending is concerned.

They have even surpassed the notoriously spendthrift Barcelona. The Catalan giants have ‘only’ laid out £137.7m in transfer fees this time around, albeit that is on three heavyweights in Robert Lewandowski, Raphinha and Jules Kounde.

PSG have spent £132.8m on transfers, according to Transfermarkt, with their big signing, Vitinha, costing £37m from Porto.

And the mighty Real Madrid have gone big on Aurelien Tchouameni, a defensive midfielder from Monaco, who accounts for all of their £72m spend.

In the Premier League, Forest’s outlay lags behind only Chelsea, Manchester United, West Ham and Spurs. What a contrast to last season, when the Reds spent just £6.3m.

It is remarkable to consider that Forest have blown more than all of the clubs in the Eredivisie – the Dutch top flight – put together (£159m), and 60 per cent more than the combined sum of the transfers to Belgium’s Jupiler Pro League (£100m) in yet another indication of the power of the Premier League.

So, no one can accuse Forest of not giving it a go in the top flight, even if their approach has antagonised rivals and, at times, looked chaotic.

Marinakis has reportedly employed a team of agents to scour the market for potential recruits, inflating prices and raising expectations among players, whose deals are not always completed.

Questions were also raised over the recruitment strategy the club has employed. The Sun reported Forest had bid for 30 players by early August and the owner’s shopping spree was not ‘in sync’ with manager Steve Cooper.

It had appeared lopsided, but by the end of the window Marinakis and Cooper had met their objective of having multiple players in each position and quality to boot.

The late addition of Boly has boosted the backline, which was unchanged from the Championship in the defeat to Spurs and even with the addition of Kouyate, they struggled in a 6-0 thrashing against Manchester City.

Aurier may yet offer support to Neco Williams, who has started brightly at right wing back.

Cooper insists he is nothing but grateful for the owner’s support and the former England Under-17s boss has done a remarkable job in knitting together disparate talents to make a reasonable start to the new season, beating West Ham United 1-0 at home and taking a point at Everton in a 1-1 draw.

‘I don’t get too involved in the budgeting. But what we’re trying to do is put together a squad that will give us the best chance to compete at this level,’ he recently told the Nottingham Post.

Forest have made 18 permanent signings as well as three loans, bringing in goalkeeper Dean Henderson on loan from Manchester United, left-back Renan Lodi from Atletico Madrid and Bade from Rennes.

While Forest’s extensive recruitment campaign has attracted attention, Cooper and the club’s fans point out that the squad was hollowed out after promotion. Five loan signings, who played a big role in the play off push, including Djed Spence, now with Spurs, and Manchester United loanee James Garner all departed.

In all, 13 players departed with another 11 going out on loan. And of those who have come in, two are already injured – Omar Richards has suffered a hairline fracture in his leg and Moussa Niakhate, after a promising start, is set to miss three months with a hamstring problem.

‘I go back to how teams that have come up with us or in seasons before, have already had the types of signings we’ve had to make,’ added Cooper, who has now adept at fielding questions on recruitment having had a lot of practice.

‘We recognised that straight away, we’re trying to catch up, if you like, and we’ll see where that takes us.’

Money does not necessarily buy Premier League survival, let alone comfort, and the Forest manager is already emphasising the need to win, not just play well. Fulham’s £105m investment did not save them in the 2018-19 season and Aston Villa’s £144m outlay only saw them narrowly avoid relegation by one place after going up in 2019.

But Forest have already won new friends with their attractive, attacking style and received a vote of confidence from pundits, despite their chastening defeat at City.

Ex-Liverpool defender Jamie Carragher told the BBC that spending big in the Premier League, guarantees nothing, but there will be a ‘real fear for other clubs’, where Forest are concerned.

‘Forest are bringing players off the bench who cost £40m – they have real strength in depth and it will be a big worry for teams who expect promoted teams to go down. I think Forest will be seriously scaring people.’

If their spectacular outlay does indeed bring about survival, the Premier League riches will can be used to replenish the coffers. Two years in the top flight is now believed to be worth £300m, including additional revenues and parachute payments, which increase after the first year.

But how can Forest afford to spend more than £160m on players and stay within the Premier League’s financial fair play riles, and how do they compare with the rest of Europe’s elite?

How do Forest compare to Europe’s high rollers?

On spending, at least, Forest are back among Europe’s elite. The Premier League has dominated transfer spending this summer like never before.

Top-flight club clubs broke their spending record in the summer window with a week to go to the transfer deadline on Thursday night, according to analysis from finance company Deloitte.

They have spent more than £2 billion, which exceeds the previous record of £1.4bn in 2017, and Forest, two-time European Cup winners, are in the leading group.

Of the 10 biggest spenders so far in the 2022 summer transfer window, eight of the clubs are English. Forest sit behind Chelsea, Man United, West Ham and Spurs in fifth, but ahead of Barcelona in sixth, PSG in seventh and Bayern Munich in ninth.

How can Forest afford it?

The Greek owns shipping companies, one of which is the Capital Maritime, and together they boast a fleet of 99 tankers and container vessels, according to InsideWorldFootball, with a market value of $6bn.

Marinakis also owns a Greek-based media empire and Marinas is the principal investor in a renewable energy company in his homeland. His personal net worth is often put at £515m.

He has not only turned on the money taps at the City Ground following promotion. Marinakis has been investing heavily in the training ground, academy and squad since he took over Forest in May 2017.

Football finance expert Kieran Maguire estimates he has underwritten losses of about £400,000-a-week during his time at the helm.

Marinakis also owns the Greek Super League club, Olympiacos. In contrast to Forest, the Athens side has only spent £9m in the transfer market this summer, including £1.8m on Philip Zinckernagel from Watford, who was on loan at Forest last season.

How can the investment not breach FFP rules?

That is a question asked with increasing frequency, given the huge amounts of money being spent throughout the Premier League.

And it is not just the transfer fees, Marinakis has sanctioned a huge uplift in wages, too, with Jesse Lingard alone reported to have secured £6m for his one-year deal.

In the Premier League, profit and sustainability rules, allow losses of £105m over three years. However, the margin is much lower in the Championship, so at the end of this season, Forest will only be afforded permitted losses of £61m for the seasons 2020-21, 2021-22 and 2022-23.

However, they have been smart in some of their transactions. They have offered long contracts to their most expensive acquisitions, including Williams, Gibbs-White, Awoniyi and Dennis, spreading the cost over the duration of their deals and diminishing the financial impact on the accounts this season.

Jesse Lingard was acquired by Nottingham Forest from Manchester United on a free transfer, but it is reported that he will earn up to £6m during his one-year contract at the City Ground

In addition, revenues will rocket from £18.4m in 2020-21, to far above £100m as a result of the Premier League TV deal, increased attendances, commercial income and retail sales.

And then, a significant amount of actual losses can be written off in the financial fair play (FFP) calculation. Expenditure as a result of Covid, investment in infrastructure, the academy, women’s, youth and community football can all be deducted.

Forest recently gained approval from the local council to redevelop the City Ground in a £100m project to increase capacity to 35,000. Any spending on that scheme can also be set against the losses.

While Forest may navigate the FFP rules this season, spending may well be limited in the next campaign.

Explore our social media accounts along with other pages related to themhttps://topfut.com/related-pages/