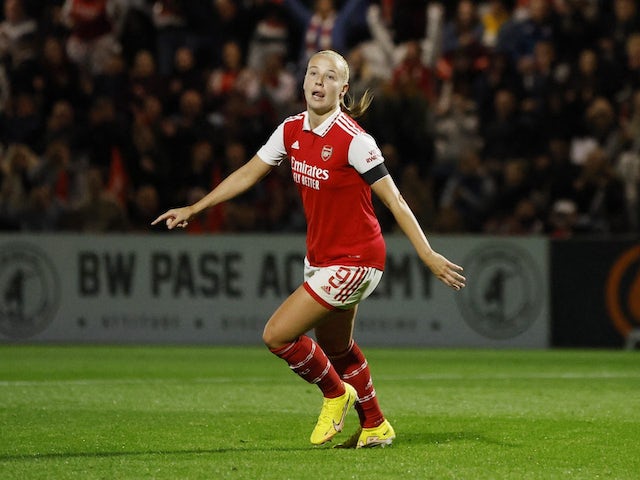 With a place in the Women’s Champions League group stage at stake over the next week, Arsenal Women and Ajax Vrouwen meet for the first leg of their second round tie on Tuesday.

The final phase of qualifying will decide 12 remaining group slots, with the winners joining holders Lyon, plus Wolfsburg, Chelsea and Barcelona.

Following a week’s delay, Arsenal’s WSL season got under way on Friday in satisfactory fashion, as they set out on the long road towards toppling London rivals Chelsea from their pre-eminent place in English football.

In front of a capacity crowd at Meadow Park, Euro 2022 stars Leah Williamson and Beth Mead returned to domestic action, and after Brighton’s Emma Kullberg was sent off in the sixth minute, the result was rarely in doubt.

Mead struck two second-half goals after Kim Little and Stina Blackstenius had given Arsenal a healthy lead before the hour-mark, as the home side fired in a total of 34 shots on their visitors’ goal.

Now, coach Jonas Eidevall quickly turns his attention to European competition, and ensuring that his side remain in contention to match – or even surpass – their run to the Champions League quarter-finals last season.

Should the 2007 winners make it through their playoff following the return leg in Amsterdam next Wednesday, all three of their home games will be played at the Emirates Stadium, with the group stage kicking off in late October.

By contrast with their hosts, after qualifying for the 2022-23 Champions League preliminaries by finishing runners-up to Twente in the Eredivisie, Ajax Vrouwen saw their first competitive action of the campaign back in mid-August.

The road to next year’s final in Eindhoven began with the first qualifying round, in which Ajax overcame Kristiansands and then Eintracht Frankfurt Frauen.

At the end of a close-fought encounter with the latter, substitute Eshly Bakker scored the winning goal in stoppage time; knocking out the four-time champions.

Having negotiated such a hurdle at the opening stage, head coach Suzanne Bakker then led her side to a 0-0 friendly draw with Koln Frauen, before their domestic campaign began with defeat to Twente in the Dutch Supercup.

Nonetheless, subsequently starting their league campaign with a 4-0 home win over Fortuna Sittard Vrouwen – with Victoria Pelova scoring twice – sets Ajax up nicely for a stern test of their credentials on the continental stage. 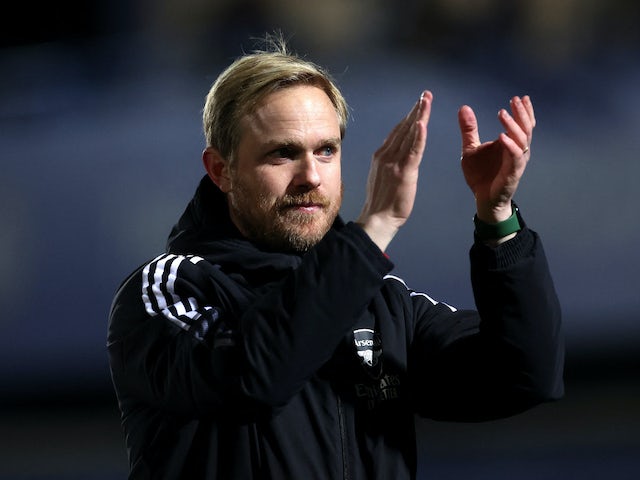 After making a strong start to the WSL season, Jonas Eidevall is likely to retain a consistent starting XI on Tuesday.

Caitlin Foord is therefore set to combine with Republic of Ireland captain Katie McCabe on the left flank, with Kim Little running the hosts’ midfield.

Up front, Stina Blackstenius leads the line in tandem with 2016-17 and 2019-20 Champions League top scorer Vivianne Miedema, while new signing Lisa Hurtig is available from the bench.

Ajax Vrouwen will field Netherlands internationals Victoria Pelova and Sherida Spitse, who both featured for their nation at Euro 2022, and they should be joined by Quinty Sabajo in midfield.

Romee Leuchter is expected to be the visitors’ lone striker, with the main competition for places between Soraya Verhoeve and Liza van der Most at full-back.

Possessing greater depth throughout their squad, Arsenal can make home advantage pay against a talented Ajax side and secure a two-goal advantage for next week’s decider in Amsterdam.

Discover our social media profiles and other pages related to it.https://topfut.com/related-pages/