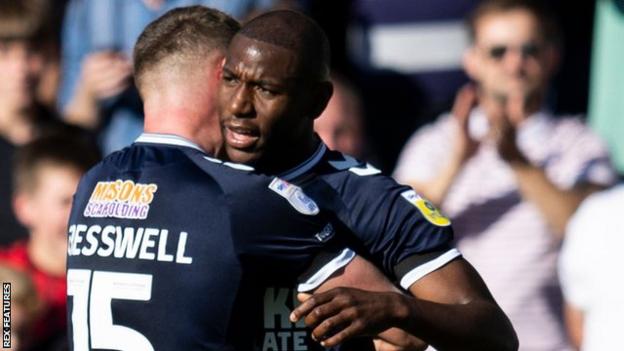 Millwall secured a much-needed three points after seeing-off Blackpool 2-1 at The Den in the Championship.

Gary Rowett’s side had lost four of their previous five matches but stopped the rot against the Tangerines.

Zian Flemming was a constant threat and the Dutchman’s header went in off keeper Dan Grimshaw to break the deadlock after 14 minutes.

Though Arsenal loanee Charlie Patino levelled for Blackpool before the break, Benik Afobe won it for the Lions in the final half-hour.

Under-pressure boss Rowett made four changes to the side which lost at home to QPR in midweek but the Lions started brightly and the tone for the day was set when Flemming headed straight at Grimshaw from a cross from the lively George Honeyman early on.

They took the lead when Flemming rose highest to meet Scott Malone’s outswinging corner and his downward header squirmed past Grimshaw and over the line via the inside of the post.

Blackpool grew into the game and George Long – in for Bartosz Bialkowski between the posts – needed to hold a Shayne Lavery header from a left-wing cross from Dom Thompson on 23 minutes.

It was 1-1 on 34 minutes when Thompson was played in down the left after some neat approach play and pulled the ball back to Jerry Yates, who had time and space to unselfishly tee-up the unmarked Patino, who rifled into the roof of the net via a deflection off Long.

Flemming fizzed a shot over the bar from the edge of the box just before the break and saw another long-range effort held well by Grimshaw moments after the turnaround.

The Dutchman continued his quest for a goal and, after dummying himself some room, he thudded a shot against the inside of the post on the hour.

The pressure continued and the hosts went back ahead three minutes later as Callum Styles saw a shot blocked but the ball fell kindly to Afobe to lash home the rebound and register his second goal of the campaign.

Theo Corbeanu strode forward in search of an instant reply but saw his effort hit the side-netting before, at the other end, Grimshaw denied an effort from Malone and Flemming was narrowly off target soon after.

The Tangerines’ Kenny Dougall fired over the bar with 15 minutes remaining as the Lions registered a fifth straight home win against Blackpool.

“Blackpool play with a lot of energy and were coming in off the back of a defeat to Rotherham, so I’m sure they were like us and desperate to put in a much better performance before the international break.

“I’m pleased we scored first. We spoke about it before the game to the players. We have conceded the first goal on eight occasions this season out of 10 games. That gives you a massive mountain to climb and makes things very difficult, especially in this division. The goal gave us a little bit of confidence.

“The first goal settled us down. We conceded a very poor goal to let them back into the game but I think second half at times we moved the ball really well, attacked really well, it was just a question of whether we could get the second goal. I thought Benik was excellent and thoroughly deserved his goal.”

Our social media profiles here , as well as other pages related to them here.https://topfut.com/related-pages/