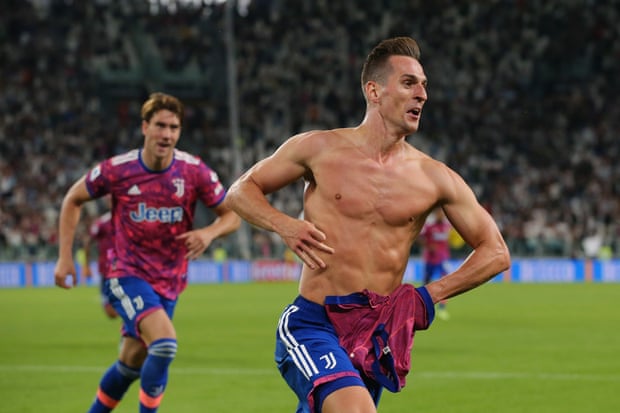 Arkadiusz Milik knew the punishment but still committed the crime, ripping off his shirt and throwing it in the air as he barrelled toward Juventus’s supporters behind the goal. They came tumbling down the stand towards him, delirious and disbelieving. In the 91st minute, their team had trailed 2-1 at home to Salernitana. Now, in the 95th, Milik had scored to put them 3-2 ahead.

A comeback worth getting sent off for. Milik had been shown a yellow card 10 minutes earlier, so his celebration would earn him a red. Even after the referee, Matteo Marcenaro, showed it to him, the striker continued to high five teammates on his way towards the tunnel.

Salernitana might not be glamorous opponents – a team who spent most of last season in the relegation zone – but Juventus needed this. They had collected only two wins from their first five Serie A matches, before being beaten by Paris Saint-Germain in the Champions League. This was supposed to be the season when they returned to the forefront of Italian football. Massimiliano Allegri said in July that his team had a “duty” to win the Scudetto.

Milik’s goal felt like a turning point, Juventus recovering from two goals down, rediscovering the trait that used to define them: the ability to just win when they did not deserve to. And then, it was taken away from them by a VAR review.

Marcenaro was sent to the monitor and shown footage of Leonardo Bonucci behind the Salernitana defence as Milik headed across goal from a corner. The Juventus player had tried, unsuccessfully, to get a touch. In Marcenaro’s interpretation, Bonucci was interfering with play. There is a discussion to be had on this, given the ball already appeared to be beyond the reach of goalkeeper Luigi Sepe. Less debatable was the fact this camera angle was the wrong one – completely missing Antonio Candreva, who had moved out towards the corner flag and was playing everyone onside.

One controversy became submerged in the next. A bench-clearing scuffle resulted in further red cards for Juventus’s Juan Cuadrado and Salernitana’s Federico Fazio, as well as Allegri himself. None of them may serve their suspensions as unhappily as Milik: sent off for celebrating a wrongly disallowed goal. He posted a video showing Candreva’s position to his social media channels on Sunday, saying he had “no words”.

The Polish striker has been a bright note in this disappointing start to the season for Juventus, joining on loan from Marseille at the end of the transfer window and scoring in each of his two previous league appearances. He has known mixed fortunes since leaving Napoli to join the French club last year, prolific patches interspersed with dry runs and niggling injuries.

Perceived as a backup to Dusan Vlahovic, another tall and muscular No 9 who can fill a similar role, Milik’s fast start may increase calls for the two to play together. Despite scoring four in his first four league games, and having another goal correctly disallowed for offside on Sunday, Vlahovic has often looked isolated in attack.

Allegri had appealed for patience in his pre-game press conference, reminding reporters that Paul Pogba, Ángel Di María and Federico Chiesa were all injured and contending that a whole new season would begin after the World Cup. Juventus won five of their nine consecutive league titles during his previous tenure, but did not always start fast in those seasons, either. In 2015-16, they picked up five points from their opening six games, yet finished on 91.

Still, there is anxiousness among supporters. The re-hiring of Allegri last summer was supposed to mark a return to the “just win” mentality of the 2010s, an abandonment of the idealism that led the club to hire Maurizio Sarri and Andrea Pirlo. As Allegri reiterated: “We don’t need to be pretty, likable losers, but unpleasant winners.” Fail to triumph, though, and you are left with the worst of both worlds.

The lack of enthusiasm for this team was evident from empty seats at the Allianz Stadium. Salernitana’s traveling support provided a contrast. There were officially 1,300 packing out the away section, but a fair few more whose allegiance became evident as their team roared to an early lead.

Never in their history had Salernitana held a two-goal advantage away at half-time in a Serie A match, yet this was richly deserved. Repeatedly they caught Juventus out with long balls, and it was a raking right-to-left pass from Dylan Bronn that found Pasquale Mazzocchi, who performed a triple stepover to freeze Weston McKennie before whipping in a cross for Candreva to score at the back post.

The second came from the penalty spot, Krzysztof Piatek converting in first-half injury time. The same striker had earned the opportunity when his shot struck Gleison Bremer’s hand after more direct play down the right.

Bremer got Juventus back into the game with a thumping header at the start of the second half, but Salernitana did not wilt. The hosts huffed and puffed but still were on course for defeat until a clumsy challenge from Tonny Vilhena gifted them a penalty of their own in the 91st minute. Sepe parried Bonucci’s attempt but the Juventus player did well to hook home the rebound.

Then came Milik’s header, mistakes in the VAR booth and red cards galore. By the time the dust settled, both teams might have considered this an opportunity missed. Juventus were wronged, but Salernitana had been within touching distance of a famous win.

It feels a world away from where Salernitana were at the end of 2021, when 16 fans made a 1,000-mile round-trip to attend a game cancelled due to Covid. At the time, they were bottom and on the brink of being thrown out of the league due to the conflict of interest created by them sharing an owner with Lazio.

The situation was finally resolved with Daniele Iervolino taking over, before hiring relegation escape specialist Davide Nicola as manager. Salernitana collected more points from the next 14 games than they had from the first 23 and reached safety with one to spare.

This season they are aiming higher. After falling out with Salernitana’s highly-reputed sporting director Walter Sabatini, Iervolino replaced him with Morgan De Sanctis and began a squad overhaul. Fifteen players have been added, for an outlay of more than €40m. Nicola was retained and offered a chance to show he can do more than just a rescue job.

So far, results have impressed. Salernitana’s only loss was against Roma on the opening weekend. Heading into Sunday’s clash, they could boast better possession stats and more shots on goal than their opponents.

New arrivals have integrated quickly. Piatek was making his first start, but his equally impressive strike partner Boulaye Dia has three goals and two assists already. Giulio Maggiore, a 24-year-old signed from Spezia, more than held his own in a midfield battle with the Argentina international Leandro Paredes.

“I think this was two points lost for us,” said Piatek after the final whistle. Salernitana were lucky not to lose, but disappointed not to win at the same time.

We have our social media profiles here , as well as other related pages herehttps://topfut.com/related-pages/