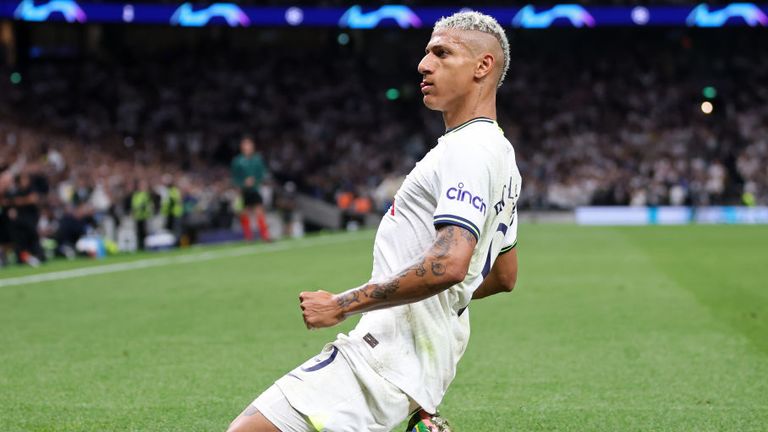 It had been over two years since a ball in this competition had been kicked at their magnificent stadium and although it took them 76 minutes to find their stride, it was the Brazilian that hauled Spurs to victory.

Marseille had looked comfortable up until Chancel Mbemba was sent off for denying a clear goalscoring opportunity just after half-time for wiping out Heung-Min Son.

Even then, Spurs lacked any real conviction in their attacking play and Richarlison’s opener – a header from 10 yards out – was Antonio Conte’s side’s first effort on target.

Spurs then went and scored with their second effort on target when Richarlison showed superb finishing skills to divert a Pierre-Emile Højbjerg cross home with another header.

The overwhelming nature of his achievement on what was his Champions League debut became too much for him at full-time when he was embraced by his family. Spurs’ new number nine was left in tears, realising the stage he had just performed on.

Player of the match: Richarlison

How stuttery Spurs were saved by Richarlison…

Marseille were 30 minutes late arriving to the Tottenham Hotspur Stadium but it was Spurs that looked unprepared in the early stages. In an uneventful first half where Spurs relinquished possession and allowed the visitors to strike efforts from distance it was Harry Kane who had the best chance on 40 minutes but he sent a low drive wide of the far post.

Of their efforts from range it took 45 minutes until Marseille tested Hugo Lloris as former Arsenal man Matteo Guendouzi sent a stinging low drive from 25 yards that was palmed away.

The game-changing moment came when Mbemba – formerly of Newcastle – timed his last-man challenge badly on the sprinting Son, who was too quick for the defender. The referee had little choice but to brandish the red card.

A Spurs siege was expected on the Marseille goal but it didn’t materialise with the visitors quite happy to defend deep in their box. The introduction of Dejan Kulusevski sparked the hosts into life as his direct dribbling gave Marseille a different problem to negotiate.

When the goal came it was simple but effective in its execution. Ivan Perisic cut back onto his left foot from the right and found Richarlison with a precise cross. The Brazilian powered a header through the gloves of Pau Lopez, who probably should have done better.

There was little the goalkeeper could do with Richarlison’s second which came five minutes later. Hojbjerg delivering the ammunition from the left this time and Richarlison bulleting a clever-headed finish off the post.

For the boy from a small town in south-east Brazil, it’s what dreams are made of.

Tottenham can now hit you from all angles

In times of trouble and frustration it is usually Harry Kane that gets Tottenham out of a sticky situation. He wasn’t needed on this occasion as Tottenham now have another world-class finisher that only needs a moment to make a difference in a game. It was Richarlison riding to Tottenham’s rescue here as they ground out a rather ugly win.

One of Spurs’ problems in trying to reach the next level with Kane at the forefront has been the tough task of convincing a central striker of sufficient talent to make the move and potentially play as Kane’s understudy. This is why Richarlison is such a savvy signing from Antonio Conte. They now have a Kane understudy, who on his day isn’t too far away from the England star’s ability, but the beauty of Richarlison is that such is his flexibility and desire he can play anywhere across the front-line and is darn good at it too. There is a child-like joy in the way Richarlison plays football, especially in a competition he is obviously so keen to make his mark on.

“He deserved to have a night like this. I remember him telling me when he signed he wanted to listen to the Champions League music and play in this competition. Those were important words from him.”

Antonio Conte praises his Tottenham side following their 2-0 win over Marseille, which saw them make a good start to their Champions League campaign.


Antonio Conte speaking to BT Sport: “Today we expected a really tough game. Marseille are a physical team but with good quality. In the first half we lost a lot of duels. When you play against this type of team, really aggressive, it’s important you can keep the ball. Second half we did this.

“Marseille are a good team. For us it was important to get the three points and start well in this competition. We need to take confidence. They were unbeaten this season.

“Richarlison is in good form. We have to play in two days against Manchester City. Now we have to try to rest and recover well. City played yesterday so have one day more to rest. In my opinion that’s very important.”

Tottenham can go top of the Premier League with a win at champions Manchester City on Saturday, live on Sky Sports; kick-off 5.30pm.

Marseille will look to continue their Ligue 1 title challenge at home to Lille on Saturday in an 8pm kick-off.