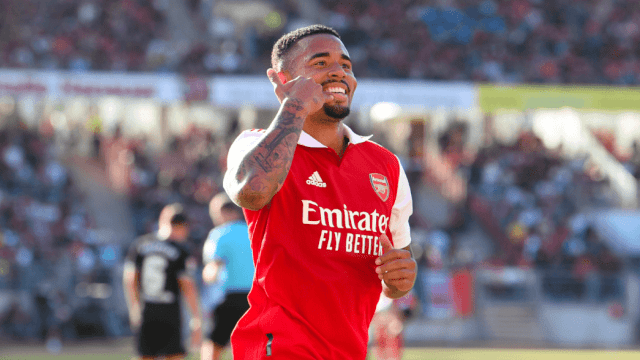 Hi Guys, I am Sankalp- known for my Twitter page, Understanding Football. Apart from being an avid FPL fan, I have been an Arsenal fan for the last 20+ years of my life. I have gone through the ups, and downs of this entire journey but somehow the love for the club has survived and grown even stronger these days. Here I am sharing some of my views as an Arsenal correspondent for Allaboutfpl.

Arsenal ended the last season with a surprising 5th place coming ahead of Manchester United but falling short against Tottenham revival under their manager Conte. Arsenal assets though were very popular last season with players like Saka, ESR, Ramsdale, and White giving plenty of returns to FPL managers. This season, Arsenal go in looking to get back into Champions League and have already spent big in the summer with sales mostly being on the lower side of returns. Let’s look at our transfer season before discussing further.

Link to all our 2022/23 Pre Season articles including a transfer tracker of all new signings, all team pre-season friendly updates, team previews, fixture analysis, position-wise analysis, and more. Completely free to access as well!

After a bitter end to the season, it is easy to see why Arsenal have ensured depth signings are a priority for them as much as signing starters. Marquinhos, Turner, and Viera come in to the bench of this team in all probability though the departure of Omari Hutchinson means it is possible for Marquinos to move to the academy for a year. Viera was one signing that really surprised us as it came without any rumors. Very very strong technical talent and this provides us depth across multiple positions- more on that later.

Jesus comes in as our striker- given his price there was a lot of noise on how Arsenal was forced to overpay for a striker with just 1 year on contract. This post a much-criticized winter window where Arsenal did not add a striker despite the loss of Auba and the decline of Laca.

However, he was Arteta and Edu’s first target and we can already see why. Skillset wise he was already everything Arsenal wanted- the ability to drop deep, run off defender’s back, go wide, pass well, strike well. He had everything we needed, just the consistency of doing this. Think the confidence is what he was lacking and that already seems to be back. 7 goals and 1 assist later, we know Jesus is now the most owned player for this season, getting into GW 1 with more than 70% ownership.

Zinchenko comes in as a competitor for Tierney, very difficult to say he is a backup for him as Zinchenko adds so much in technical quality. While we will get into playing styles and formations, very easy to say the on the ball security of Zinchenko will really add to Arteta’s style of heavy ball possession and faster flank rotations.

Link to our pre-season round-up for all Pre-season fixtures, including line-up, goals and assists for all premier league teams.(Directly scrolls to Arsenal)

Needless to say, there is a stark difference in the way we are playing now compared to last season. Arsenal look really attacking as a team and seems to be one of the fittest teams in pre-season. The team already seems settled on the field and the off-and-on movements have become really really good. The team looks very different from how we have seen Arsenal play in the last few seasons.

On paper, the starting formation for arsenal remains how we played for most of last season ie 4-2-3-1. Because of Tomiyasu and Tierney’s injuries, Ben White moved to RB and Saliba came in as RCB. Zinchenko got a run as our LB as well.

In attacking formation, Arsenal now play 2-3-5 / 2-3-1-4 as the CB pair stay back around the halfway line, we have both fullbacks now playing as inside fullbacks as you can see even in the average formation. Xhaka has been playing a bit of a free role and moves between the mid and attack while Partey stays back alongside the fullbacks.

Odegaard (£6.5 Million Midfielder) is the surprise factor as he has played much more advanced than he did last season. He is no longer dropping down to collect the ball and initiate attacks, he is now much closer to Jesus as well. For me FPL POV, the Arsenal attack seems to be the place to be because-

My notes on what I saw in pre-season has me really really excited to see how the entire team has developed so far. Jesus seems already very much in sync with the rest of the squad- including Partey & Xhaka. His runs are creating a lot of confusion across multiple areas of the pitch as he is running both behind the defenders centrally and often changing direction and trying to take the spaces Martinelli vacated.

Jesus has been fascinating in friendlies and has scored goals that you see from an on-form striker. His confidence seems sky high just like his ownership. I think he feels like a strong set and forget striker for up to 8 GWs. I would ideally not want to be over-smart on this – good fixtures, a striker on form, and plays for a team that has settled down really well.

Martinelli played as an interchangeable CF especially in the Seville match while Jesus played wider. When playing left, Martinelli was continuously looking to pick up both Jesus and Saka runs and this makes Martinelli a great pick from FPL.

Saka while staying wider continuously finds himself in goal-scoring situations via the constant movements by players around him while he continues to hold down the left fort. I have seen Odegaard and White look for some moments on the wide left providing Saka the option to go inside and try out the stunning left footer curler of his but these moments are lower, Martinelli Saka and Jesus connection does look stronger for now.

Odegaard as pointed out above is now a much more advanced midfielder- he is the option that we won’t have a lot of managers go for at the start of the season and sensibly so since he is 0.5 Million more expensive than Martinelli but at some point of time, we would start seeing him as credible FPL asset compared to last season.

I agree with the current philosophy, Ramsdale at £5 Million is the best defensive asset. I am not that keen on Zinchenko as I feel he will not be a strong FPL asset and will mostly be a conventional CS hoarder. That makes me feel both Saliba and White are good £4.5 Million guys to go for in case you don’t have money for £5 Million. Ideally, I feel Arsenal will be a closer to elite attacking team than we have been and that would have some impact on our defensive metrics as we saw last season itself. Ideally, I would like to start with 2 Arsenal attacking assets and make up my mind on third one around GW 2/3 .

It is easy to see why we turned heads with our Chelsea and Seville performance. This shows the team is settling down, getting better at some things, and trying out additional stuff. Overall, we can read the potential that I think we had in the team is coming out better and better.

I expect Arsenal to really go hard at UCL this year and that can come via more goals. These goals come from ⅔ familiar sources upfront. At their price, they seem easy picks.

It is rare to see an Arsenal player with 70% ownership and yet we have Jesus crossing that number- his mobility is adding a bit more unpredictability to the team but so is the technical ability of our new LB. Zinchenko’s technical quality comes up very well given he can play both on the ground and in air via cross long ball to Saka.

Positional rotation is going to be the key for Arsenal- we will see more movements in and out of central areas and I feel this will give us bigger margin goals against unsettled defenses. I would really like to attack our home games on a double Arsenal combo min. & would use it to support a big at-back/ threemium model.

As an Arsenal fan, I think this will be a huge season, we have our squad getting stronger and stronger and this one has the potential to show how well we have grown beyond the reach of the sides below us and closer to the ones above.

Do follow me on Twitter @Understanding Football, for all things Arsenal and FPL. Good luck for the season!

Further reads from ALLABOUTFPL ahead of the 2022/23 FPL Season

Link to all our 2022/23 Pre Season articles including transfer tracker of all new signings, all team pre-season friendly updates, team previews, fixture analysis, position-wise analysis, and more. Completely free to access as well!

Link to all our FPL Forwards, FPL Midfielders, FPL Defenders, and FPL Goalkeepers series of blogs including the best 4.0 million defenders, and 4.5 Million midfielders.

All our Best Pre Season Reads:

A Guide to FPL Team Structure | 2022/23 FPL Season
Rotation Free FPL Assets Based on Previous Season Minutes
FPL Player Analysis- Based on Home and Away Data | Fanalytics
What is BPS in FPL? | Which Players Benefit More from BPS?
Talisman Theory – 2021/22 Report | Who Got The Assist(WGTA)
How I landed up my first ever Top 500 finish | Sankalp’s column | FPL Tips
8 Simple & Effective FPL Tips For A Good FPL Overall Rank | FPL Paz

What’s next from ALLABOUTFPL ahead of FPL Gameweek 1 of the 2022/23 FPL Season?

We’ll be covering team previews for all 20 teams, FPL team structures, must-own players, player comparisons, differential picks, fixture analysis, captaincy metrics, multiple FPL drafts with pros and cons, chip strategy, rules guide, beginners guide, FPL tips, and more. Keep checking allaboutfpl.com for all our blogs and subscribe to our free newsletter through the link below. We’ll also be posting regularly about the same on our social media accounts so follow us on Twitter, Instagram, and Facebook keep our notification ON.

Take a look at our social media accounts and also other related pageshttps://topfut.com/related-pages/